Kom Ombo (the Mound of Umbu), an important center for the sugar trade. The ancient site of the city of Nebet, later called by the Greeks Ombos. Several very early cemeteries found in the neighborhood attest to the early settlement of the area. For a period the town was the capital of the Ombite nome as it was on the route from the gold mines of the Eastern Desert and the caravan trail to Nubia, It probably enjoyed its greatest prosperity during the Ptolemaic period when African elephants were trained for the Ptolemaic army here. Where the river bends to the W is a series of sandbanks which must, in ancient times, have been a favored basking place for crocodiles and it is therefore not surprising that the town is associated with Sobek the crocodile god. later in association with Horus the Elder.

Although the principal gods of Kom Ombo are Sobek-Re and Horus and their consorts, many other gods and goddesses were worshipped in the temple including Amun, Khnum, Ptah, and various other forms of both Horus and Hathor. The district in which Ombos was situated was known as “the Great Seat” or ‘the Great Throne, derived from the seat on which the goddess Tefnut sat when she visited the area, while Re was upon his campaign. The site in myth was associated with Re’s ﬁght for supremacy against Seth, in which struggle he was aided by Horus the Elder. Thus the two Horuses are amalgamated; as the Elder, he helps his father Re against Seth for the possession of Egypt, as the Younger, he is Horus the ‘Avenger of his father’, fighting the same enemy to avenge Osiris.

The temple of Sobek and Horus is one of the most picturesque as seen from the river, and it is unusual, but not unique, in being dedicated to two deities. As at many other sites, it is only the last of a long series of shrines built in the same place. It is built of Silsilah sandstone and was completed under Ptolemy V although additions were made later. The infantry, cavalry, and other troops stationed in the Ombite Nome erected the temple for the king.

Kom Ombo was one of those temples to which pilgrims came to be healed. They fasted, spent the night in the temple precinct, and were treated by the priests of Horus, ‘the good doctor’. There is evidence of their presence in the many graffiti scribbled on the pavement of the outer corridor. They wrote their names in Greek, they drew their feet pointing towards the shrines, even in the first hypostyle hall. They played games with stones, and the boards on which they threw are carefully drawn out. They also drew ships, trees, and other objects to while away the long hours of the night.

The front of the temple, including the pylon, slipped into the river but was partly shored up by the Dept of Antiquities in 1893. The temple as it now stands, surrounded by the remains of a mud-brick enclosure wall, consists of a damaged pylon, a Mammisi and chapel of Hathor, a courtyard, inner and outer hypostyle hall, three vestibules, two sanctuaries, and a series of small rooms grouped round these, and two ambulatory corridors. In the crypts were crocodile burials (many specimens are usually to be seen in the Hathor chapel). Also, there is a little passage in the thickness of the walls which gave priests access to a chamber above the sanctuaries.

The E half of the temple was dedicated to Sobek-Re, his wife (a form of Hathor), and his son, the young moon god Khonsu-Hor. The W side of the temple was dedicated to Horus the Elder (Haroeris), his wife Hathor (called Ta-Sent-Nefer, Good Sister), and his son, the young Horus (called Pa-Heb—Tawy, Lord of the Two Lands). This was not the only temple dedicated to two deities; there was a Middle Kingdom temple in the Fayyum of the reigns of Amenemhat III and IV dedicated also to Sobek and Horus, and at the other Ombos, further to the N. both Horus the Elder and Seth were worshipped.

The complex is best entered from the NE, walking to the riverward side to the SW. In front of the temple to the W lies the Mammisi of Ptolemy VII; it is largely destroyed, the W half having fallen into the river. Steps lead up to a terrace, once a small court, where there used to be four Hathor-headed columns (recorded by Napoleon’s scholars). Extant remains consist of a vestibule and two ante-chambers. There is only one notable scene, that of Ptolemy IX upright in his boat accompanied by two gods navigating through a forest of papyrus. Birds fly among the plants and on the left, the scene is surveyed by Min-Amun-Re holding lettuces. The hippopotamus goddess with other deities is shown on the border of this scene.

(1) Lower register, Ptolemy XIII with standards and texts. (2) Building texts. (3) Ptolemy XIII purified by Thoth and Horus before Sobek. (4) Texts of Ptolemy XIII and Cleopatra VI. (5) Texts of Ptolemy XIII and Cleopatra VI. (6) Ptolemy XIII purified by Thoth and Horus. (7) Lintels and door jambs, Nile gods binding the two lands. (8) Ptolemy XIII leaves the palace, purified by the gods. Adjoining the entry in the First Hyposter Hall are scenes showing the king’s baptism by Horus and Thoth who pour water over him, and a scene of the king going from his palace to the temple He is wearing a long robe, leaning on a staff and preceded by. a small figure, the inmuter priest, who offers him incense and the standards of seven divinities. The columns are composite and graceful, some of the finest late work. While the five on the facade have the base decorated with the southern lily, there are two in the body of the hall with northern papyrus emblems. The quality of the wall painting is particularly fine; one scene shows the coronation of the king before Horus and Sobek, and the goddesses of the South and the North. Nut is also shown, and a lion-headed goddess, perhaps a form of Menyhit or Isis Repet. On the inner side of the small door to the SW, the king is seen in the presence of the four winds, represented as animals, a bull, a four-headed lion, a falcon, and a four-headed snake. The ceiling is decorated with flying vultures.

(9) Ptolemy XIII was crowned by Nekhbet and Wadjet. (10) Ptolemy XIII before Isis, Recet, lion-headed, and Horus the Elder. (11—12) The king and Nile gods and field goddesses. (13—14) Ptolemy VIII with texts of hymns to Nile gods. Continuing the dual nature of the building, the Second Hypostyle Hall is entered also by two doors. On the shafts of the ten columns in this hall Ptolemy VII Eurgetes II is shown sacrificing to different gods. On the N wall, Horus the Elder is shown giving the hps (a kind of curved weapon representing the sword of victory) to Ptolemy, behind whom is his wife Cleopatra II and his sister Cleopatra III. On the W wall between the two doors is a list of festivals and deities worshipped in the temple. In this hall would have waited for the portable wooden shrine carrying the two gods’ statues.

(15—16) Processions with Ptolemy VI Philometor and Upper and Lower Nile gods and field goddesses. (17—18) King offers Ma’at to Triads of Sobek and Horus. The Outer Vestibule, decorated as are the next two vestibules to the order of Ptolemy VI, shows scenes of the foundation of the temple, Sheshat the goddess of writing laying out the temple with a measuring cord. There is also a scene of the king purifying a model of the temple. These foundation scenes had to be repeated so that the temple would remain in a state of ritual purity. Offerings were brought to this hall, and the position of the table is marked by lines drawn on the pavement. The Middle Vestibule served as the Hall of Offerings and only priests were allowed into this area. Off this on both sides were ruined rooms which must have served, as in other temples like Dendarah and Edfü, as storerooms for the temple linen, silver, and perfumes, and as laboratories and a library. On the S side is seen the lion-headed goddess presiding over the offerings while on the W wall is the temple calendar. To the S is a stair leading to the roof where there was the now-destroyed Chapel of the Disk, as at Dendarah, Edfú, and Esna. The spiral stairway which used to be on the S side has been destroyed. On the N wall of the Inner Vestibule, the two doors are the entries to the sanctuaries of Horus and Sobek and show a double scene in each of which the king is presented by deities with a notched palm branch, from which a heb-sed (jubilee) sign is suspended, representing the years of his life. This is given by Khonsu wearing a blue crescent around a red disk, followed by Horus in blue representing the air and Sobek in green representing water. On the N side of this vestibule was the Chapel of the New Year (totally destroyed) with fragments of the ceiling with elongated figures of the goddess Nut lying to the E. To the E is the door into the Chapel of Puriﬁcation in which the robing took place before the New Year Festival.

Offerings and libation before Sobek. (21) (19) Measuring the temple. (20) Ptolemy VI offers food to Horus the Elder. (22) Description of temple and address to Sobek-Re. (23) The king before Horus. (24) Extensively destroyed scenes. (25) Offering scenes. (26) Medical instruments. (27) The king consecrates the temple.

Although little remains of the Dual Sanctuaries, the work of Ptolemy XIII, they seem to have been much smaller than those at Dendera and Edfu and unlike these, but. as in the sanctuary erected by Philip Arrhidaeus at Karnak, there was in each case a door in the rear wall. The chapels around the sanctuaries have been destroyed down to ground level. Neither of the sanctuaries seems to have contained a stone naos but instead, each possesses a grey diorite altar on which the portable shrine stood. Under the sanctuaries are triple undecorated crypts and others, recently cleared. lie on either side. At the E end of the sanctuaries are a series of small unfinished chapels containing some interesting reliefs. On the NE outer face of the Outer Corridor are representations of a set of medical instruments dating to the 2С 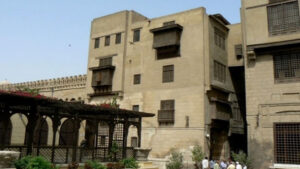 Bayt al-Kiridliyyah (House of the Cretans), also called the Geyer Anderson Museum is set at the S end of the NE ziyadah of the Mosque 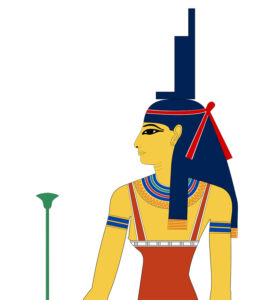 Isis – The most powerful and popular goddess in Egyptian history. She was associated with virtually every aspect of human life and, in time, became 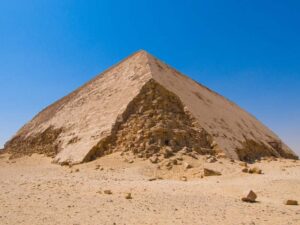