Early cultures are normally named after the type-site, where the culture was first found and identified. As a result, many modern village names have been given to prehistoric cultures.

In Egypt, there does not appear to have been a homogenous culture in the country. unlike the al-‘Ubaid in Mesopotamia. This has led to a great proliferation of names for what may be contemporary cultures. The Tasian (type site Deir Tasa in Middle Egypt) has now been equated by some with the Amratian (type-site al-‘Amrah near Nag’ Hammadi), also with Naqada I and the Gerzean (type—site Girzah, near the Fayyum) with Naqada II. Also, a point of contention is Naqada III, and most historians would be willing to see Naqada ll directly precede the Dynastic period. The culture of Naqada I seems to have evolved from the Badarian and is thus an indigenous growth. The men were small, slim, and bearded and were probably related to the contemporary Libyan culture to the NW. Nothing very much is known about the political organization of Egypt during the early Predynastic Period, but by the late Predynastic Period, two clearly defined confederations start to emerge with political heads which can be defined as kings. In Upper Egypt the capital was at Kom Ahmar (Neken), the king of which wore a white crown, and in Lower Egypt, the capital was at Tell al-Fara’in (Buto and Pe), where the king was distinguished by a red crown. This period seems to have been one of continuous conflict, first one side obtaining the ascendency, then the other. According to one version the North was at one time Victorious, then defeated, resulting in the Union of the Two Lands. The South thus always claimed ascendency over the North. The scenes of these struggles are shown on a series of slate palettes which must have been dedicated as votive offerings by the victors in the temples. The most famous of these is the Narmer Palette (now in the EM), showing the conquest of the Delta by Narmer. The Early Dynastic or Archaic Period (c 3100—2686 BC). The history of Egypt for the first few dynasties is obscure though a new capital was founded at Memphis, traditionally by the first king, Menes (Hor A-ha) in an area reclaimed from the Nile. The history of the first five dynasties, recorded on the Palermo Stone, is brief and material remains from the burnt and looted royal tombs are extremely tantalizing. There is uncertainty as to where the earliest rulers were buried as there are two sets of tombs, one at Saqqarah in the N and the other at Abydos far to the S. It is likely that those at Abydos are only cenotaphs, while the former tombs contained real burials. In Egypt, as opposed to other Middle Eastern countries, there has always been more evidence about death than life. This is mainly because many settlements are now buried under modern towns and have never been excavated, and because the rock-hewn or stone tombs and temples were built to last ‘for millions and millions of years’ whereas houses and palaces were considered of only ephemeral importance and constructed of mud-brick which readily disintegrate.

It is to Manetho, an Egyptian who wrote in Greek in the 3 C BC, that the division of kings into dynastic groupings is due. Little is known of the seven kings of the 1 Dyn. save that they were buried in mastabas (either at Saqqarah or Abydos) and that the remains of their once rich furniture was burnt and destroyed. These tombs were surrounded by subsidiary burials of courtiers and servants who were apparently killed at the time of the king’s interrment to accompany him in his journey to the Afterlife. After the 2 Dyn. there are no more of these sacrifices; instead the dead are accompanied by model ﬁgures who were supposed to wait upon them by magical means.

About 2890 BC the 1 Dyn. was replaced by the 2 Dyn. The dynasties are connected in the female line in the form of the Great Royal Heiress through whom the crown descended, but for the early period, these connections are not very clear. During the 2 Dyn. there was political upheaval and a struggle for power involving the transfer of religious loyalty of the ruling house from the god Horus to Seth. This change was transitory and, by the end of the dynasty, allegiance had been restored to Horus. 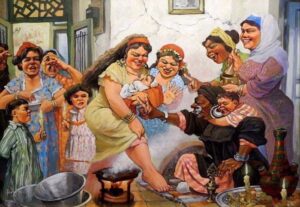 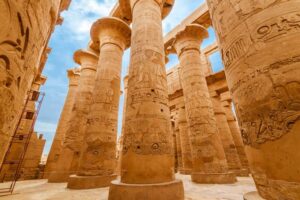 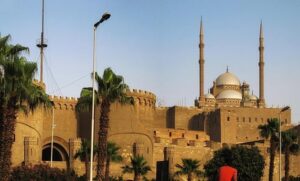 The Citadel of Salah El Din in Cairo 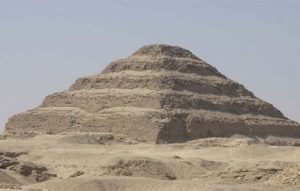 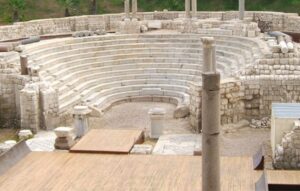